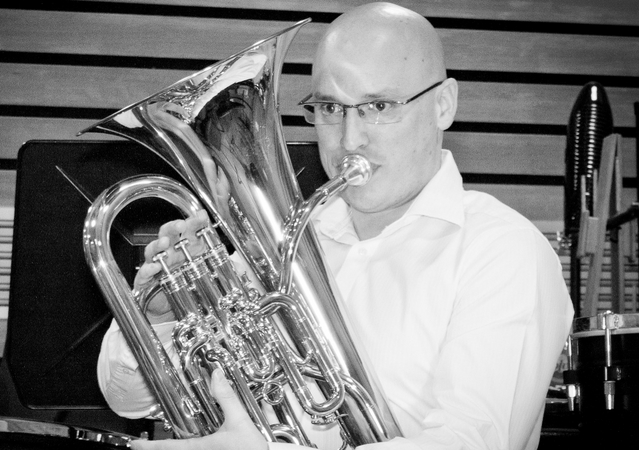 John Storey is a euphonium and trombone player based in London and the south east. After becoming a member of his first band at the age of eight, he joined the National Youth Brass Band of Great Britain at 16 before reaching the brass final of BBC Young musician of the year in 1996.

John went on to study music at the University of Huddersfield under the guidance of the late Geoffrey Whitham. During this time he also joined the James Shepherd Versatile Brass.

After graduating, John joined the Band of the Coldstream Guards as Principal Euphonium. Throughout his time in the band John was privileged to play at many traditional state occasions such as Trooping of the Colour and the Festival of remembrance. He has also performed at many prestigious Royal occasions.

John was posted to the Band of the Royal Logistic Corps in April 2014.

As well as travelling around the world with the bands, John has represented the army internationally as a guest soloist. In 2000 he was invited to Kingston, Jamaica by the country’s Defence Force Band as visiting soloist for the Capital’s Easter Celebrations. In 2003 he flew back across the Atlantic to perform at the US Army Band Tuba and Euphonium Conference in Washington DC. A trip he made again last year to perform once again.

John cites one of his career highlights as performing the Flower Song from Bizet’s Carmen for Her Majesty the Queen at an intimate concert in Windsor Castle, a performance that was later mentioned in dispatches. A second great moment was being part of the fanfare team opening the Live 8 concert in Hyde Park, London.

Outside of the military, John continues to be involved in the brass world, most recently playing with the Royal Philharmonic Orchestra Brass at their Cadogan Hall concerts with Allen Vizzutti and the newly formed Brass Machine ensemble under Dr. Frank Renton.

John has also continued to be involved with the progressive rock band, Big Big Train. Performing with them on their award winning shows in August 2015.