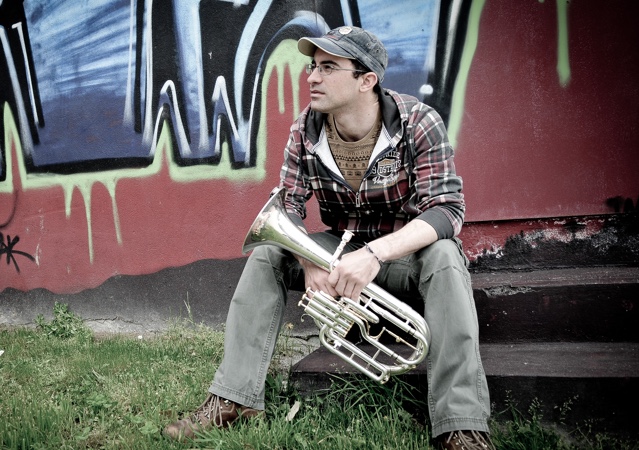 After distinguishing himself in numerous solo competitions, including Swiss Soloist Champion in 1998 and « Best Horn » at the European Solo Competition in 2001, he received in 2004 his teaching degree with highest marks and honors at Fribourg Conservatory in the class of Jean-François Michel. Issued from the brass bands mid (fanfare La Lyre from Conthey, Ensemble de Cuivres Valaisan), he is also involved in various musical projects, ranging from traditional to jazz or contemporary music.

Very involved in the promotion of the Eb Tenor Horn, he recorded in 2013 a CD entitled « URBANICITY », which has considerably increased the repertoire of the Eb tenor horn and was acclaimed by the critic. In March 2019, he organized the 1st Swiss Alto Horn Festival, a weekend of contests, concerts and masterclasses around the Eb Tenor Horn. In autumn 2019, he presented a new project, « Unplugged », consisting of a series of studio recordings and a concert with a Eb Tenor Horn Ensemble.

In 2014, Julien obtained a Master of Arts HES-SO in wind ensembles conducting in the class of Jean-Claude Kolly at the High School of Music in Lausanne/Fribourg. As a music director, he led the bands Union Instrumentale of Ayent-Anzère, Echo de la Dent-Blanche of Les Haudères, Perce-Neige of Hérens, Union Instrumentale of Forel/Lavaux, the association of bands Echo du Mont of Aproz and Helvétia of Ardon plus the Brass Band Junior Valaisan and the Brass Band Lyon.

Composer, Julien has over thirty works to his credit, some of which were recorded by the ECV on a double CD released in October 2010 and entitled « Music of Julien Roh & Ludovic Neurohr ». His catalog contains music of different levels and styles, mainly composed as commissions for brass or wind bands. His music is melodic, accessible and very popular with the public in Switzerland and even abroad. In 2016, he created his own music edition, « MY music edition », in order to promote his compositions and arrangements himself.