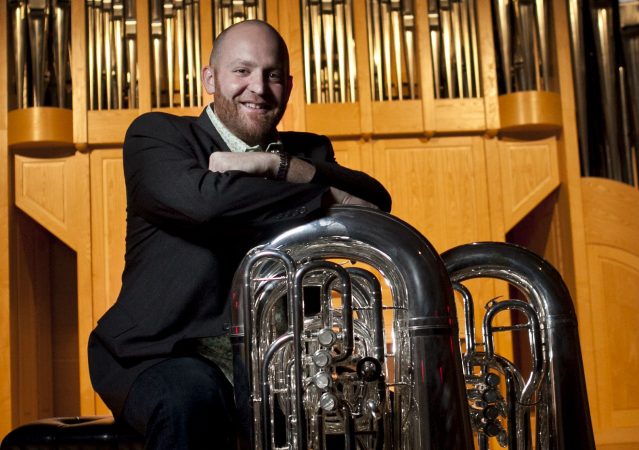 Stephen Kunzer is from the beautiful desert of Las Vegas, Nevada Stephen received his Bachelor of Music degree from the University of Arizona with emphasis in both Tuba Performance and Music Education. His Master of Music degree is from the University of Cincinnati, College-Conservatory of Music (CCM) where he served as the graduate assistant. Before his appointment at Oklahoma State University, Stephen was a first-call freelance musician on the Las Vegas Strip, performing with countless headliners. Most notably – Jennifer Hudson, Carole King, Joshua Bell, Emmylou Harris, Martina McBride, John Fogerty, Arturo Sandoval, and Willie Nelson. He has performed in numerous shows including Disney’s The Lion King and Mary Poppins, Thoroughly Modern Millie, and The Rat Pack Is Back, and has toured extensively with the Dallas Brass Quintet. Stephen is in high-demand throughout the world as a solo artist and clinician, giving lectures, masterclasses’ and recitals. His performances have been heard coast-to-coast in the United States,Thailand, and Korea, and he is a regular presenter at Regional and International Music Conferences. Stephen has previously served on faculty at the University of Nevada, Las Vegas and is a contributing writer for the International Tuba and Euphonium Association Journal Stephen is a Besson/Buffet Crampon USA INC. Tuba Artist and Clinician.LibrarysustainabilityOSU Center for Health Sciences OSU-Institute Of Technology OSU-Oklahoma City OSU-Stillwater OSU-Tulsa