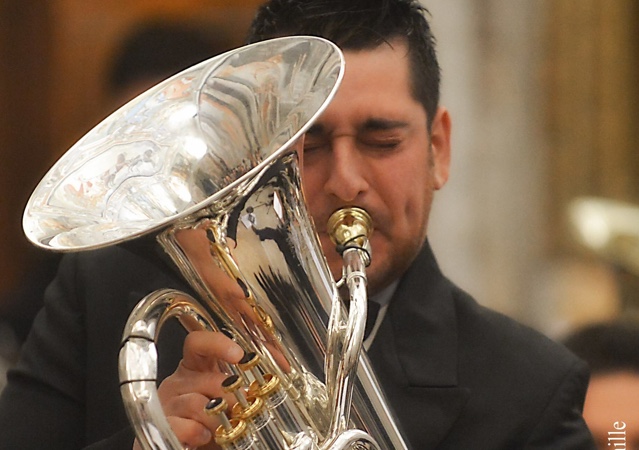 He started to learn Euphonium when he was child with his Father Guglielmo, and after he continued with M° Matteo Caramaschi. During the Year 2004 Luciano De Luca began the specialization in Euphonium, as student of STEVEN MEAD, DAVID CHILDS, MATTEO CARAMASCHI, ROGER BOBO. During 2005/2006 year He had DIPLOMA DI ALTO PERFEZIONAMENTO IN EUPHONIUM with Steven Mead at Istituto Superiore Europeo. He won on 2010 National Competition for Euphonium Place in National Wind Orchestra of Italian Police where he is often soloist. Mr. De Luca teach in many Annual Masterclass in Rome,Messina, Florence, Lucca, Milan. He is 1° Euphonium on “Italian Brass Band”.

He is Founder of “Italian Sound Quartet” with won several competition as VILLE DʼAVRAY PARIS COMPETITION, (1st Prix), CACCAMO INTERNATIONAL COMPETITION (1st Prix), placement as finalist at INTERNATIONAL COMPETITION OF SANGUINETTO. Also, He is 1st Euphoinum of Miraphone Tuba Quartet. Last Febrary 7th 2014 he was in Germany where he was nominated Ufficial Miraphone Endorser ( one of the most important Brass Factory of the World)