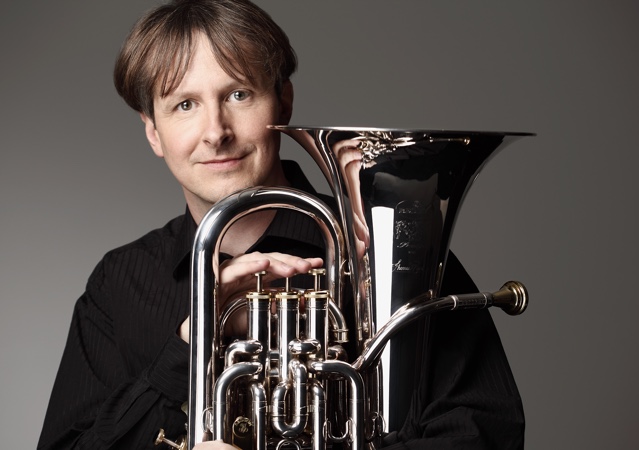 Euphonium tutor at the Bern University of the Arts and the Lucerne University of Applied Sciences and Arts, arranger and composer

Thomas Rüedi was born in 1969 in Oberwil bei Büren near Berne, Switzerland and began playing the euphonium at the age of 11. He received his professional musical training on this instrument in England, the home of brass music, between 1991 and 1995. He studied under, amongst others, Phillip McCann and Peter Parkes at Sheffield University and also devoted his attention to the study of conducting, arranging and composition, areas which have also strongly influenced his professional life. During this time he also performed with many top British brass bands. An important milestone in his career came when he was awarded first prize in the European Solo Competition for Brass Players in Munich in 1999.

His solo engagements have led Thomas Rüedi throughout Europe, Africa, Asia and the USA. Through this work he is involved with numerous symphony orchestras, wind and brass bands. On his continual search for new tonal spheres Thomas Rüedi formed the duo „Synthesis“ in collaboration with the marimbaphone virtuoso Raphael Christen. Together they convincingly combine the sounds of the two instruments to create a new whole. The joint CD production „Synthesis“ and Thomas Rüedi’s solo CD „Elégie“ received international recognition.

Thomas Rüedi is strongly committed to educational work. He is euphonium tutor at the Bern University of the Arts and the Lucerne University of Applied Sciences and Arts; as a guest tutor he gives many masterclasses at colleges throughout Europe and overseas. As an orchestral musician he plays regularly with the Tonhalle Orchester Zürich and in other renowned symphony orchestras such as the Sinfonieorchester des Bayerischen Rundfunks or the Zurich Opera House Orchestra.

He proved his capabilities as a conductor through his work with, amongst other groups, Brass Band Bürgermusik Luzern (A-Band), where he was musical director between 1995 and 2002, and with Seeland Brass between 1997 and 2006. As guest conductor he conducted the winning band, Brass Band Berner Oberland, at the Swiss Open and European Open contests in Lucerne in 2004.

Thomas Rüedi has also made a name for himself as arranger and composer. His oevre includes over fifty works for wind instruments. His many arrangements of Swiss folksongs have, in particular, earned a place amongst the standard brass and wind repertoire.