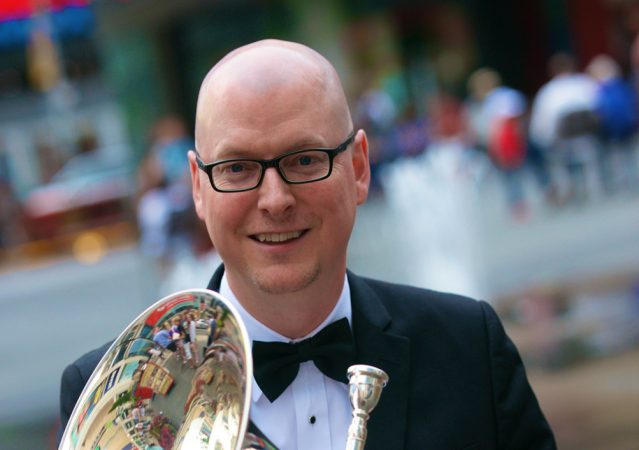 Robert Miller, a Besson/Buffet-Crampon Artist and Clinician, and has established himself as one of Canada’s leading euphonium soloists. He has performed with the Hannaford Street Silver Band; has held positions as Principal Euphonium and soloist with Intrada Brass, the Hamilton Temple Band, and the Canadian Staff Band; and has kept a private euphonium studio for the past twenty years. Currently, Mr. Miller is Principal Euphonium of the Weston Silver Band and the Mississauga Temple Band; he is Associate Conductor for the Weston Silver Band; and has instructed euphonium as a member of the University of Toronto Faculty since 2007.Largely through the influence of the Salvation Army, Mr. Miller’s musical focus has been the brass band medium. By his involvement with Brass Bands, he has been featured in a number of concerts with other prominent figures such as: Richard Marshall, Ronald Romm, Steven Mead, and Jens Lindemann. These experiences have led him to give back to the Salvation Army community, not only as a soloist, but also as Bandmaster, Deputy Bandmaster, Band Leader, and clinician for a number of Salvation Army groups.Despite Mr. Miller’s prominence in Canada, his appearances have not been limited to Canada. He has toured throughout the United States, England, Scotland, Wales, Denmark, New Zealand and Australia, with a tour set for July 2012 in Brazil. In 1995, he took part in the TV New Zealand (TVNZ) Waitakere Brass Band’s European tour. And in 2010, Mr. Miller competed in the 2010 US Open Brass Band Championships with the Weston Silver Band, and won the title of “Best Featured Soloist” performing Peter Graham’s “Brillante”.Robert Miller’s discography includes “Marching to Glory” with the Hamilton Temple Band; “Hi, Christopher Columbus!”, “Gâité Canadienne” and “The Transatlantic” with the Intrada Brass; “Made in Canada”, “The Southern Cross”, and the “69th Annual Thanksgiving Concert” with the Canadian Staff Band; “Celestial Morn” with the Mississauga Temple Band; “Best of US Open 2009” and “Best of US Open 2010” with the Weston Silver Band; and in 2013, Mr. Miller is set to release his solo CD “Fountain of Euph” with Rachel Ewing on piano.