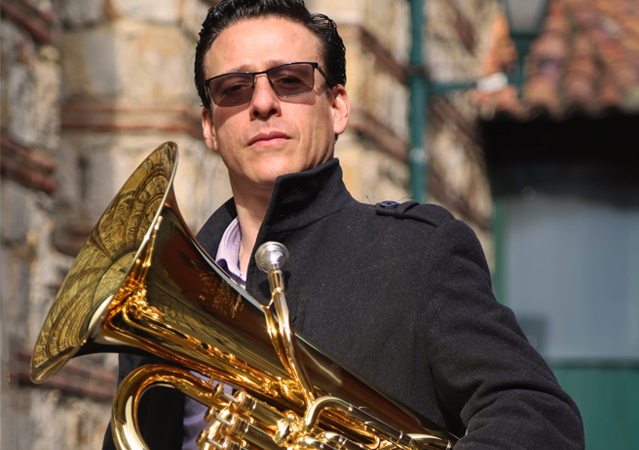 Lucas José Manuel Fernández Castro was born in Bogotá in 1982. He begins his musical studies with Professor César Augusto Díaz García at the Instituto Diversificado Albert Einstein in the district of Mosquera, municipality of Cundinamarca. Later, he continues his studies under Professor Agustín Chunza in the Symphonic Band of the same municipality as performer of the Euphonium. In 2000 he begins to study Euphonium in the Musical Studies Basic Programme at Universidad Nacional de Colombia with Professor Carlos A. Aponte (R.I.P). In 2004 he begins his undergraduate studies at the same university under Professor Fredy Romero Nieto. While studying Euphonium, he studies Orchestral Conducting with Professors Libardo Saavedra (Colombia), Miguel Pinto (Cuba), Ricardo Jaramillo (Colombia), Salvador Brotons (Spain), Timothy Perry (U.S.A.), Miguel Ángel Casas Barreto (Colombia) and Guerassim Voronkov (Russia). He takes Euphonium lessons in Buenos Aires, Argentina with Professors Steven Mead (England), Hugo Migliori (Argentina) and Patricio Cosentino (Argentina). Throughout these studies, he has received the guidance of Professors such as James Ackley (U.S.A.), Eric Aubie (France), Freed Milles (U.S.A.), Mel Culbertson (U.S.A.), Andrés Arévalo (Colombia), Louis Tillet, (France), Adam Frey (U.S.A.), Juan E. Sepúlveda (Colombia), Fredy Romero (Colombia), Fabien Wallerand (France), Hans Stroecker (Austria), Walter Hilgers (Germany), Jason Ham (U.S.A.), Jon Sass (U.S.A.), Steven Mead (England) y Thomas Rüedi (Switzerland). In 2002 Lucas he was awarded at the series Jóvenes intérpretes (Young Performers) of the Conservatory of Music at Universidad Nacional de Colombia, performing as soloist of Euphonium at Virgilio Barco Library of Bogotá, and in 2003, at the Foyer of Teatro de Cristóbal Colón of the same city. In 2004 he joins the Cundinamarca’s Symphonic Band where he performs as the Euphonium Soloist, Strings Leader and Assistant Director until 2012. He is awarded along with this Band the Orden al mérito Antonio Nariño of the National Congress of Colombia (Congreso de la República de Colombia) for leadership in the Cundinamarca Municipality. In 2007 he joins the Tumbacatre Orchestra (Folklore Fusion) of Colombian music. He records with this band Como yo te Gozo in 2010, and tours both nationally and internationally. He participates in the recording of En el sitio of the music bands of the music conservatory of Universidad Nacional de Colombia. In 2009 he is awarded the First Place in the I Concurso Internacional de Interpretación Musical Tuba y Euphonium (I International Competition of Musical Interpretation of Tuba and Euphonium) in Bogotá and that same year he performs as Guest Euphonium Performer in the Systema Solar record (Folklore fusion – new urban music). He was jury of the XXXIV Municipalities’ Music Bands Festival Villeta that same year. In 2010 he was participant in the I Concurso Nacional de Euphonium (I National Competition of Euphonium) at the district of Tocancipá. In 2011 he ends his undergraduate studies of Euphonium with Professor Rafael Pérez (Colombia) obtaining University Degree as Músico Eufonista (Euphonium Player) with emphasis in Orchestral Conducting at Universidad Nacional de Colombia. He performed as Euphonium player with Chupakabras Jazz Quartet. In 2012 he records the album of the XVII Jazz al Parque 2012 Jazz Festival as Euphonium player of the Big Band Bogotá. Lucas was the creator and host of the FIRST NATIONAL WORKSHOP OF EUPHONIUM 2013 developed in Bogotá, becoming the pioneer of the Euphonium School in Colombia. He was Head Conductor of the Children and Adults Symphonic Bands of La Calera district, with which he has been awarded in the municipality area. With these bands he obtained the First Prize of the University Concerts cycle, season 2014, in the Fabio Lozano Auditorium at Universidad Jorge Tadeo Lozano. For this work he received a medal from the Mayor’s Office of La Calera district. Then, he becomes a Professor of Euphonium and Tuba, and Head Conductor of the Symphonic Orchestra of Universidad de Cundinamarca, with which he records the music and the promo video for the La Catedral de Sal de Zipaquirá (Salt’s Cathedral of Zipaquirá). In 2014 he performs as a Euphonium player and guest actor in the play María Barilla of playwright Leonardo Gómez Jattin (Colombia). The same year he is Guest Conductor of Fundación Orquesta de Cuerdas de Bogotá, with which he develops the musical Cuento de Navidad at Teatro de Bellas Artes de Cafam in Bogotá; he is also Guest Conductor of the Orquesta Sinfónica Regional de Cundinamarca (Regional Symphonic Orchestra of Cundinamarca), with which he gives 9 concerts of Carl Orff’s Carmina Burana. He is Guest Conductor of LA VITROLA JAZZ BAND in 2013 and 2014. Since 2014 to 2016 he was jury of the competitions Jóvenes Intérpretes del Banco de la República (Young Performers). In 2016 he was jury in charge of choosing the musicians members of the Orquesta Sinfónica de Caldas in the municipality of Manizales in Colombia). He was also jury in the municipalities’ competition of Symphonic Bands in Samaniego, municipality of Nariño since 2016 until 2017. He was guest facilitator teacher of Euphonium at Universidad Industrial de Santander, UIS in 2016. He was guest musician as Euphonium player in the record Historia de los Hombres Burning Caravan, a band from Bogotá. He participated in the CONDUCTING MASTER CLASSES & WORKSHOPS ST. PETERSBURG, Russia, at Peter, The Great Music Academy, at the 50th International Master Class in Orchestral Conducting, conducting and performing Euphonium with The Saint Petersburg Symphony Orchestra in March 2016. In 2015 he is member of the band PAPAYA REPUBLIK (Folklore fusion Colombian Urban music) with whom he records a single as Euphonium player and tours both nationally and internationally. He was host and Professor at the FESTIVAL INTERNACIONAL DE EUFONIO “EUFOLANDIA 2016”, in Bogotá.

The Professor was invited by Pontificia Universidad Católica del Perú (PUCP) to give master classes of Euphonium and Orchestral Conducting in February 2019, performing as a soloist of Euphonium with the Symphonic Band of this university. He was guest Conductor of the same Band and was awarded publicly by the Mayor’s Office of the Municipalidad Distrital de Santa Cruz de Flores provincia de Cañete – Región Lima, Perú, for stimulating work and performance of people who contribute with the development of the district of Santa Cruz, and for strongly supporting the work of strengthening, learning and development of childhood and youth at such district and Latin America. Professor Lucas Fernández has a Master in Orchestral Conducting from Universidad Nacional de Colombia under Professor Guerassim Voronkov (Russia). He was Assistant Conductor of the Symphonic Orchestra of the Music Conservatory of Universidad Nacional de Colombia. Currently, he is Professor of Euphonium, and since 2013 he is Head Conductor of Symphonic band and the Symphonic Orchestra ASAB (Academia Superior de Artes de Bogotá) at Universidad Distrital Francisco José de Caldas. Since 2014 he is Professor of Euphonium; he is also a Professor in the Master in interpretation and Pedagogy of Euphonium at Universidad Nacional de Colombia since 2019. He is Head Conductor of the Brass band (Brass Band) at the same university. Since 2014 he is Professor of Euphonium, Tuba, Trombone and Music Theory at Instituto Técnico de Formación Musical of Colegio Salesiano de León XIII Bogotá. He is the director of the Euphonium quartet Euphoria Colombia consisting of students of Euphonium from the universities where the Professor Fernández works. He is member of the duet DÚO WIND HOLZ (Violin – Euphonium) with which he develops an intense concert activity and master classes throughout his country. Since 2014 he is resident Euphonium player of the Philharmonic Orchestra of Bogotá and Head Music Conductor of the Orquesta Sinfónica Capital (Capital District Symphonic Orchestra) of Bogotá, Colombia.

Currently he develops symphonic activities and projects as a Professor, orchestral and band and a player of Euphonium in and outside of his country, and he has become a reference point of Euphonium in Colombia for new generations both in his country and in Latin America.