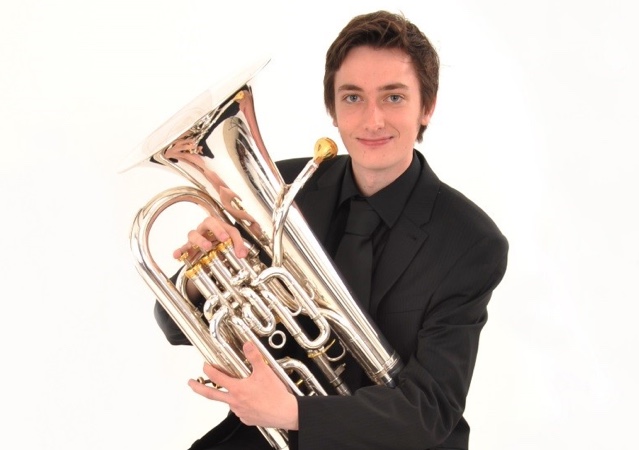 James is from Houghton-Le-Spring, near Durham and began playing baritone at Hetton Lyons Primary School at the age of 8, moving on to play euphonium with the Houghton Area Youth Band and Houghton Brass. Recently being described as ‘one of the leading young euphonium players of his time’ he has come a long way since then.

He was honoured to accept a music scholarship to Sedbergh School in Cumbria in 2005. He gained both his ATCL and LTCL diplomas in his first year at Sedbergh at 15 years of age. Whilst at Sedbergh School, James was able to visit Austria, Slovenia and France as a featured soloist, including performing at the Prestigious ‘Albertville Festival de Musique Militaire’ in 2008. James was also invited to play as a soloist at Kneller Hall, the Army Music School.

In 2004 James was Principal Euphonium at the inaugural National Childrens Brass Band of Great Britain Course. The following year he was also invited to play euphonium in the National Youth Brass Band of Great Britain, attending 10 courses until 2009 under the artistic direction of Elgar Howarth and Bramwell Tovey. As part of his tenure, James also won the Katie Ogden Solo Prize as well as playing under Dr. Robert Childs, Dr. Nicholas Childs, Garry Cutt and Christopher Adey.

James was delighted to accept a place at the Royal Welsh College of Music and Drama in 2009 to study under Dr. Robert and David Childs and joined the Pontardulais Town Band, where he helped them win at the Blaenavon and Welsh Area competitions and gain promotion to the Championship Section. In 2010 James was invited to play with the National Wind Orchestra of Great Britain, conducted by Jim Gourlay. With the National Youth Wind Orchestra, James was asked to play at the BBC Proms in 2012.

In 2010 James joined the Cory Band on 2nd Euphonium. With Cory, James was able to win the British Open in 2011 as well as play at the European Championships in Montreux and Rotterdam as well as visit France and Germany performing with the band. With Cory, James has played in the Royal Albert Hall, Birmingham Symphony Hall and the Concertgebouw in Amsterdam. He was a Soloist with the band on numerous occasions, including the band’s trip to Collombey in Switzerland, Huddersfield Town Hall and as part of the Welsh Proms in St. David’s Hall.

In 2011 James was a finalist in the Prestigious BBC Radio 2 Young Brass Soloist Competition held at the Royal Northern College of Music. That recording along with his semi-final performance were broadcast on Radio 2. James also won the Linda Mowat Solo Prize awarded to the best Brass Soloist at the Royal Welsh College of Music and Drama in just his second year at the College.

In 2010 James was a founder member of the Euphony Quartet which quickly became one of the RWCMD’s finest chamber ensembles. After winning the Philip Jones Brass Ensemble Prize, the Quartet played alongside the Central Band of the Royal Air Force at the Cardiff New Brass Festival. The Group played the Festival Prelude concert of the RNCM Festival of Brass 2012. Due to weather delays they also played in the Opening Concert of the Festival, performing works by James Flight (winner of the Stainer and Bell Brass Composition Prize) Christopher Bond (Composer in Association, Cory Band) as well as internationally recognised composer Tom Davoren. In 2012 the Euphony Quartet qualified for the International Tuba and Euphonium Conference Small Ensemble Competition representing the United Kingdom. The group were delighted to win the prestigious award and were able to perform in the Gala Concert of the Conference, included in their programmes for the Semi-Final and Final of the competition were two original compositions by James, ‘Earthrise’ and ‘Chasing Destiny’. ‘Earthrise’ has been recorded by the Penn State University Euphonium Quartet and by Jim Fieldhouse on the Fairey Band CD ‘Nefarious’.

James has commissioned many new works for the Euphonium, most notably commissioning Tom Davoren and Paul McGhee to compose works for his final recital at the RWCMD. David Harrington’s work ‘Phoenix Song’ for Euphonium and Orchestra was premiered in the opening of the Dora Stoutzker Hall, the new concert hall in the RWCMD and performed by James. ‘Metropolis’ by Andrew Stevenson was commissioned in 2015 and was recorded by James on the ‘Leyland in Concert Vol. 2 – Blue’ disk.

In January 2013 James was honoured to join the Leyland Band on Principal Euphonium. His first concert was performing at the RNCM Festival of Brass where he was featured as part of the piece ‘Audivi Media Nocte’ by Oliver Waespi. James is a regular soloist with the band and has quickly garnered the reputation as a top class player both in band as well as being a soloist.

James regularly tutors at masterclasses and courses around the UK working with Durham University Brass Band, the Fermanagh and Tyrone Summer School and UniBrass.