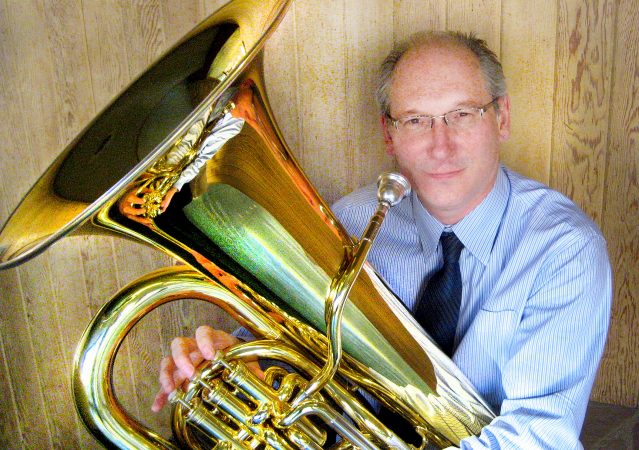 M.M. University of Kansas; B.M.E. College Conservatory of Music, University of CincinnatiScott Watson is now in his 30th year at the University of Kansas, an association that dates back to 1979. His solo efforts can be heard on both his “Stepping Stones, Volume I on Potenza Records”, as well as on the Kansas Brass Quintet CD titled “Rare Breeds & Dog-Eared Classics.” A new Solo CD titled “Thoughts of a Cow” will be released in January of 2010.Watson is known throughout the country as a master teacher, having legions of former students holding major positions in the top military bands, college-university positions, and prestigious public school positions across the country. Scott was elected and served as President of the International Tuba Euphonium Association from 1999-2001 and currently serves on their Board of Directors as Past President. As Professor of Tuba-Euphonium at the University of Kansas he is an acclaimed soloist, clinician, and chamber musician. Scott has concertized all over the world with composers such as James Barnes, Walter Hartley, Elliot Schwartz, Igor Rekhin, and Charles Hoag all composing works especially for his talents. In 2009, Scott will release a second Solo CD on Potenza Records of serious solo repertoire for the tuba.Scott regularly performs with the St. Paul Chamber Orchestra, is a member of the Infinity Brass Quintet of the Martha’s Vineyard Chamber Music Festival, the Kansas City Brassworks, and the North American and US Open champions Fountain City Brass Band of Kansas City where he is Principal Contrabass Tuba. Along with Winston Morris he is Co-Artistic Director of one of music’s most unusual ensemble-the acclaimed tuba-euphonium chamber orchestra SYMPHONIA, which has released three recordings on Mark Records. His career has seen performances with such groups and individuals as the Brevard Music Center Festival Orchestra, Kansas City Symphony, Kansas City Symphony Brass Quintet, the Crested Butte Music Festival Orchestra, Dizzy Gillespie, the Jack Daniels Silver Cornet Band, the Chestnut Brass Company, the New American Tuba Quartet, in addition to countless shows, performances and other free lance work.Scott is also on the faculty of the Midwestern Music Academy each summer and has served on the faculties of the Brevard Music Center, the University of Missouri-Kansas City, and Baker University. At KU he is the proud director of the KU Tuba-Euphonium Consort. Scott Watson is an Artist/Clinician for Besson Tubas Sovereign BE981.