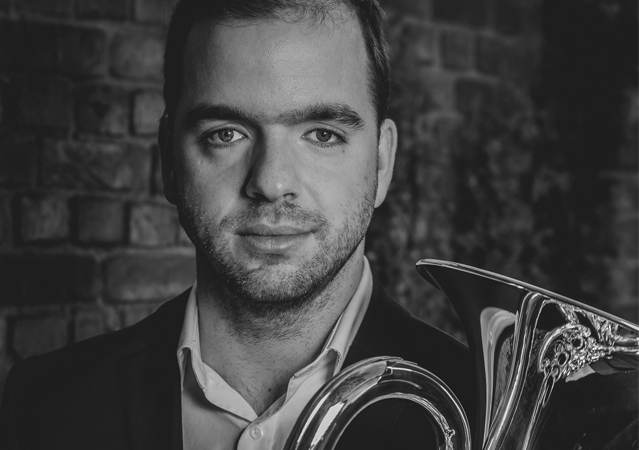 International soloist and teacher at the GO! Academy in Willebroek and the Municipal Academy of Londerzeel

Jonas Violet, born in Jette in 1995, starts his studies on cornet at the age of 6 with teacher / father Frans Violet in the music academy of Willebroek. A year later he adds the piano. At the age of 12, Jonas starts to study euphonium. In 2009 he starts his secondary studies at ‘the Kunsthumaniora of Brussels’ and in 2011 he starts as a “young talent” at the Conservatory of Antwerp. After completing a successful artistic track in 2018 with a “Master in Arts” degree, he also obtains an Academic Teacher Training’s degree a year later.

Jonas is currently teaching at the GO! Academy in Willebroek and the Municipal Academy of Londerzeel, where he motivates young people and adults to play a brass instrument and further sends them in the right direction to a Hafabra orchestra and / or even conservatory.

Jonas regularly participates in national and international competitions. He wins several provincial and national titles in the Vlamo soloist competition. In 2012 he wins the competition ‘Jonge Solisten aan Zee’, he obtains the first prize of the ‘Sonatina competition’ in Eupen, he graduates in the higher degree of the music academy with highest distinction and he obtains a first prize at the Belfius Classics. In 2016 he is selected to participate in “the European Soloist Competition”. In 2019 he becomes 2 times Vice Champion in “the Foden’s Competition” and in 2020 he takes a second place in “the British Open Contest”.

Jonas is a much sought-after freelance musician, both at home and abroad. Recent projects include the participation with various brass band orchestras in ‘The Norwegian Nationals’,’ The British Open Contest ‘, The Nationals’ and’ The Regional Championships’. In 2021 he plays a recital at Klara with the ‘Violet Quartet’ in the context ‘De Twintigers’ for which his twin brother Lode Violet is selected. This was broadcast on national TV and radio, a very welcome project in the times of Corona.

Jonas is active as a euphonium player in Brassband Willebroek, with which he wins numerous national titles and become Vice-European champion. In 2017 they win the World Championship in Kerkrade. Young Brassband Willebroek wins the European youth championships several times with Jonas as principal euphonium and gains Belgian titles in 2017 and 2018.