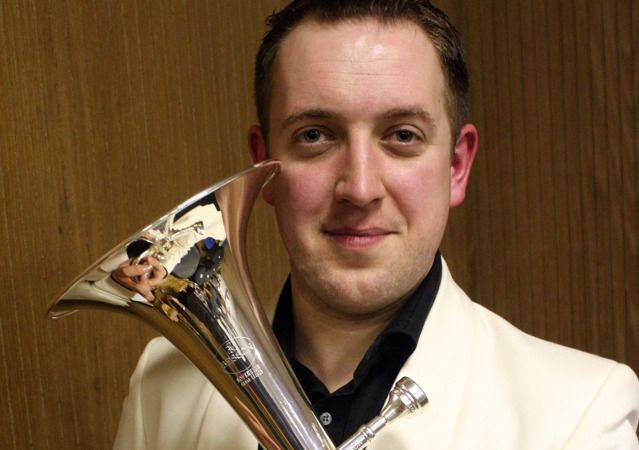 Pontypool in South Wales has always been famous for its steel and “Front Row”, but with the rise of Owen Farr, the Music World is beginning to know it for its brass and the middle of the band. Owen began his musical career with the Pontypool Brass Band at the age of six. He soon joined Gwent County Youth Brass Band and the National Youth Brass Band of Wales, progressing to Principal Horn in both ensembles. Owen’s growing talent was recognised in 1995 when he became the British Open Junior Solo Champion and was appointed Solo Horn for the Tredegar Town Band at the tender age of sixteen. He consolidated the precocious promise of his youth by enrolling in what was arguably the centre of excellence for brass musicianship at the time, the Royal Northern College of Music, in 1998. Six months later he joined the famous Williams Fairey Band. Owen thrived in both these environments and was voted “Player of the Year” by his fellow players at the band. He enjoyed many successful solo performances with the band and was also a key member in their two National Finals victories.

2002 was an extremely busy year for Owen; he graduated from the Royal Northern where his talent was recognised by his immediate appointment to the department as Tenor Horn Teacher. He also accepted a teaching post at Liverpool University. On top of this busy teaching schedule, he also went on to form “Sonar Brass” alongside Richard Marshall, Alan Morrison, Nicholas Hudson and Shaun Crowther. This dynamic ensemble has enjoyed great success, culminating in prestigious broadcasts such as “Listen to the Band” and “Friday Night is Music Night”. Owen is dedicated to improving the pedagogy of the Tenor Horn and is constantly exploring ways of improving teaching methods for the instrument he loves. This can be seen both in the positions he holds in the Birmingham Conservatoire (Lecturer in Brass Scoring and Arranging) and the Royal Welsh College of Music and Drama (Tenor Horn Tutor) and is his work as a Besson clinician where he tours the country raising awareness of the Tenor Horn with his lyrical tone and stunning technical precision. Owen was extremely pleased to be able to return to the “Land of his fathers” by joining the Buy as you View Band in 2004.

Owen is in many ways a musician’s musician, combining amazing skill on the instrument of his choice with a passionate urge to know everything about his profession and develop that body of knowledge even further. The promise of his early talent has blossomed into an assured maturity that ensures Owen’s place in the “Front Row” of brass band musicians, soloists and educators for the 21st Century. Owen Farr is an official Besson tester, involved in the development of Besson tenor horns