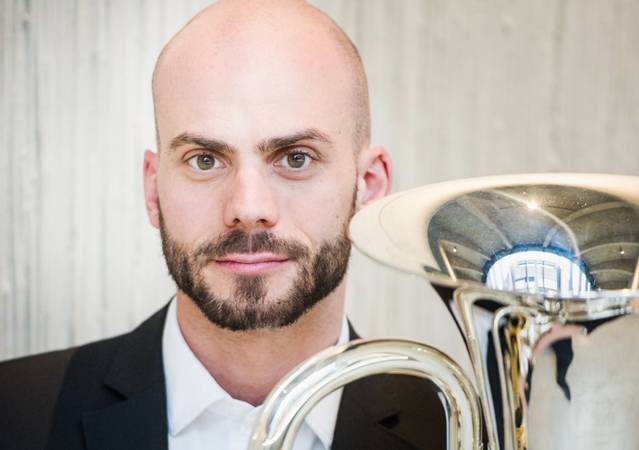 Born in Luxembourg in 1985, Philippe began playing the Euphonium at the age of eight at the Conservatoire de Musique de la Ville de Luxembourg. In 2004 he decided to further his musical education at the Royal Northern College of Music in Manchester where he completed both a Bachelor and a Master’s degree with distinction under the tuition of Euphonium-pioneers Steven Mead and David Thornton. Philippe was the first brass player in the history of the Royal Northern College of Music to achieve a unanimous perfect score of 100% in his final masters recital. This awarded him the ‘Harry Mortimer Brass Student of the Year’ prize.

Philippe is currently based in Manchester and works as a Euphonium soloist and brass tutor. In his freelance career, Philippe regularly performs with various orchestras across the UK such as the Hallé Orchestra, the BBC Philharmonic and the Royal Liverpool Philharmonic Orchestra. Since October 2015 Philippe holds the Principal Euphonium seat at the world-renowned Brighouse & Rastrick Brass Band, which has enabled him solo performances in most major concert halls across the UK as well as at most national and international brass band competitions. Philippe has given solo-recitals in Luxembourg, France, Germany, Norway and England and has appeared as guest soloist with a wide range of ensembles such as the European Union Youth Wind Orchestra, Skipton Camerata, National Australia Brass, the Luxembourg Military Band, the Brass Band and Wind Orchestra of the RNCM to name but a few.

In his attempt to help expand the Euphonium’s still quite insignificant repertoire, Philippe regularly commissions and premieres new compositions for the instrument. With composers originating from Luxembourg, England, Scotland, Finland and as far as New-Zealand, Philippe strives to put the solo-instrument ‘Euphonium’ onto the world map. Philippe’s commissions mirror his versatility as a modern euphonium player by ranging from unaccompanied works over full concerti with string or wind orchestra to pieces with chamber music accompaniment, electronic set-ups and loop-stations.

Philippe’s educational work encompasses positions as specialist brass tutor in the private schools sector and he gives masterclasses at summer courses and universities across Europe and beyond. Since 2012 Philippe also holds the very first ever Euphonium teacher post at Luxembourg Conservatoire. Furthermore, Philippe is visiting Euphonium tutor at the Royal Birmingham Conservatoire, the Trinity Laban Conservatoire for Music and Dance in London, the Junior RNCM in Manchester and the Folkwang Universität der Künste in Essen, Germany.

Philippe is a Besson/Buffet Crampon artist and performs exclusively on a Besson Prestige 2052 Euphonium.