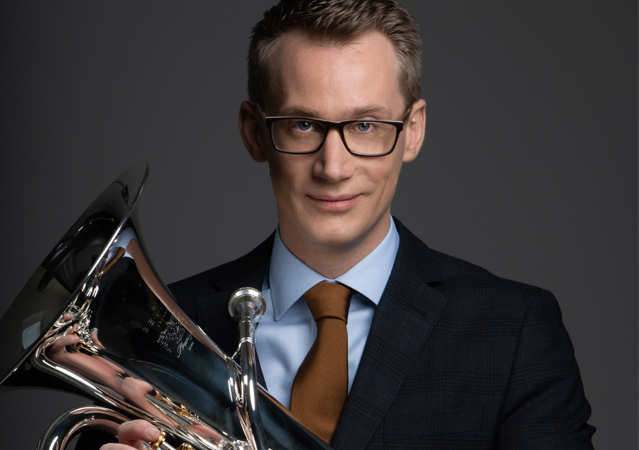 Robbert (1986) started his musical carreer as a flugelhorn player with Jo Delnoye but he switched to euphonium after several years. In 2004 he started his studies for euphonium with Piet Joris as his teacher at the Fontys College of Music in Tilburg. He followed courses in Solo Playing, Teaching and Chamber Music. At the same time Robbert started his studies for Wind and Brass Band Conducting given by Hardy Mertens. In the spring of 2008, Robbert passed both studies with credit.
In 2008 he went to the Academy of Music in Utrecht to continue his training of Wind and Brass Band Conducting with Danny Oosterman. In 2010, Robbert again passed his study with credit. During this course he continued following lessons on euphonium with Bernard Beniers and trombone with Albert Zuiderduin.

Robbert is often invited as a guest player and soloist around Europe and regularly give low brass-clinics. His trips have taken him to the USA, Hong Kong, Portugal, Norway and various parts of the United Kingdom.

Robbert has now become Besson Euphonium Artist, as of February 2019.

Since 2014 he is a euphonium player with the Marine Band of the Royal Netherlands Navy. He also is the solo euphonium player of Brass Band Schoonhoven, with whom he became five times Dutch Champions in the championship section, competed at the European Brass Band Championships five times and won the Eurobrass Drachten Contest three times. He received an award for ‘Best Soloist’ at Brass in Concert in 2016 and Eurobrass Drachten in 2013.

In 2010 he gained the opportunity to play Janacek’s Sinfonietta with the Royal Concertgebouw Orchestra and he played Gustav Mahler’s 7th Symphony with the National Youth Orchestra of the Netherlands on tenorhorn. He also played with the Fanfare Band of the Royal Netherlands Marechaussee, the Orchestra of the Royal Netherlands Airforce and many other orchestras. From 2002 until 2011 he was a member of the National Youth Fanfare Band and in 2009 he was the solo euphonium of the European Youth Brass Band in Oostende, Belgium.

At the age of 17 Robbert started his career as a conductor. In 2013 & 2015 he won the National Brassband Championships in the 2nd division, conducting his band, Brass Band Schoonhoven B. With them he also became runner up at the World Music Contest in Kerkrade in 2013.
He was a guest conductor with Brassband de Waldsang, Nationaal Jeugd Fanfare Orkest, Jeugd Project Orkest, Zomerorkest Nederland, Brabants Fanfare Orkest, Koninklijke Harmonie ‘O&U’ Beek en Donk and several other orchestras.

Besson are delighted that Robbert has now chosen a new Prestige euphonium.

After recent testing he writes: ‘The projection of sound, overtones, flexibility, endurance etc is just on a new and other level then I have experienced before. I’m glad the difference is this big, it makes the choice lots more easy’.

Besson artist Steven Mead writes: ‘It is wonderful to have such a fantastic musician as Robbert Vos playing on a Besson euphonium. I feel sure he will be a great asset to brand Besson, and I know he will enjoy to play this great instrument (Besson 2052-2) for his audiences’.