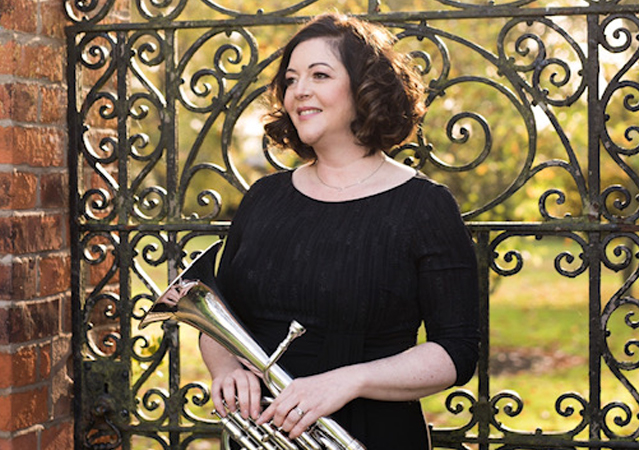 “Internationally renowned as ‘The Voice of the Tenor Horn’, Sheona White has been performing and educating since the 1990’s, expanding the technical limits of the instrument and augmenting the quantity and quality of its repertoire.”

Sheona is regularly invited as a guest soloist and adjudicator worldwide, including regular visits to Norway, Denmark, Switzerland, Holland, Australia, New Zealand, Japan and the USA.

​Sheona has performed with many of the world’s premiere brass bands including Brighouse & Rastrick, Black Dyke and Yorkshire Building Society with whom she was principal horn for 12 years. During the ‘YBS era’, Sheona shared in the band’s huge success worldwide. This included winning the All England Masters 3 times, the British Open 4 times and representing England in the European ‘EBBA’ festival on 10 occasions, winning the European Championships an unprecedented 8 times in these 10 appearances. She also performed in the Sydney Opera House as part of the YBS ‘Kings of Europe’ Tour in 2005.

Sheona recorded her highly acclaimed solo CD ‘Voice of the Tenor Horn’ in 2000 and as Principal Horn with the YBS Band for 12 years recorded numerous award winning commercial CDs including the ‘Essays for Brass’ series, ‘Bourgeois in Brass’, ‘Music of the Spheres’, ‘Alpha & Omega’ and ‘Festive Impressions’. Sheona’s latest solo CD ‘Timeless’ received rave reviews and was recently nominated as The Brass Band World Solo CD of the year.

Other recording projects include a solo feature on the BBC’s Children In Need single ‘Perfect Day’ and performing on the Mercury Prize winning album ‘The Seldom Seen Kid’ by the distinguished Manchester band ‘Elbow’.

Over the last decade Sheona has proud to have been at the forefront of developing new repertoire for the Tenor Horn, including music by Philip Sparke, Kenneth Downie, Peter Graham and Derek Bourgeois.

Sheona previously held the positons of tutor of Tenor Horn at The University of Salford and the Royal Northern College of Music until recently where she made the choice to concentrate on her passion of classroom teaching at Bolton School Girls’ Division.

In 1998 Sheona was selected as a finalist in the Cosmopolitan Women of Achievement Awards.​

In 1996 Sheona won the prestigious title of BBC Radio 2 Young Musician of the Year where she performed in the final at The Queen Elizabeth Hall, London accompanied by the BBC Concert Orchestra.  By winning this event she brought the Tenor Horn to the forefront of mainstream music for the first time.  Sheona subsequently made several broadcasts and recordings as guest soloist with the BBC Concert Orchestra including her very own ‘Soloist Showcase’ featured on BBC Radio 2 and Friday Night is Music Night. A special moment in her career was when she was chosen to perform in Westminster Abbey for the Commonwealth Day Observance Concert live in the presence of Her Majesty the Queen.

During her studies at the University of Salford Sheona became the first Tenor Horn player, first Scot and first female to be declared British Open Solo Champion. The following year she went on to win the Stanley Wainright Memorial Trophy for Best Soloist at The British Open Brass Band Championships.​

Between 1992 and 1996 Sheona studied at the University of Salford, graduating with a BA (Hons) and distinction in performance studies. Sheona was also awarded the ‘Harry Mortimer Performance Prize’ in 1996.

Sheona is very proud of her Scottish roots and hails from Ayrshire, Scotland.  She began to play the tenor horn at the age of ten displaying a prodigious talent by becoming Junior Solo Champion of Scotland and Principal Horn of the National Youth Brass Band of Scotland.