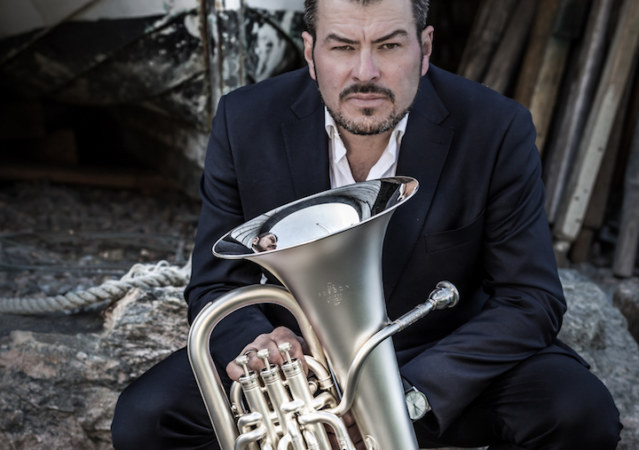 With his three solo recordings, numerous appearances at major international festivals and his passion for developing new repertoire, Tormod has established himself as one of today’s most exciting voices of the euphonium.

Tormod performed live on radio and television and has appeared as a soloist in the US, Korea, Great Britain, France, Switzerland, Austria, Hungary, Belgium, Germany, Denmark and Finland.

Tormod studied euphonium with Kim Lofthouse and Grethe Tonheim at the Grieg Academy, University of Bergen. His two exam recitals were historic, being the first Norwegian brass player to gain the highest possible mark 1.0 on both occasions.

In 2014 Tormod Flaten won the audition for the highly sought-after solo euphonium position with the Royal Norwegian Naval Forces´ Band in Bergen.

He taught euphonium at the Grieg Academy and served on the board of directors for the International Tuba Euphonium Association.

Tormod played with leading Norwegian brass band Eikanger-Bjørsvik for 13 years and he is a founding member and principal euphonium player of Bjørsvik Brass.

As a conductor Tormod has worked extensively with several of the top wind and brass bands in Norway.

He led Sandvikens Ungdomskorps to victory in 2011 when they were crowned as Norwegian Wind Band Champions.

Tormod is an experienced adjudicator having appeared at numerous international and national band, solo and ensemble competitions.

He also runs the publishing company Fundamental Music, with music for euphonium.

Please visit www.tormodflaten.com to find the sheet music available in the web store.